Monarch Airlines was a British low-cost airline that mainly operated in the Mediterranean. It was the UK’s fifth largest airline and the largest ever to collapse.

In 1967 two British businessmen, backed by the financing provided by the Italian-Swiss Mantegazza family, founded Monarch to promote air travels to ordinary families rather than being directed solely towards wealthier clients. Its activity reached the highest level in the early 2000s when the company managed to be the UK’s second greatest airline by number of passengers in many airports, the most important of which was Manchester. However, its potential did not materialize afterwards. In fact, in 2004, following the success of the low-costs carriers such as EasyJet, Monarch tried to adopt a low-cost model too, but that switch turned out to be destructive to the existent value.

From a financial perspective, in 2009, after many years of profitably, Monarch reported a pre-tax loss of £32.3m. This event led to a cash injection of £45m from the Mantegazza family. The reason for this unexpected result was a change in the company focus. From being mainly a charter airline, its business model was turned into that of a scheduled flights airline, with a target of 80% of its business being scheduled, 4x higher compared to the 20% target determined in 2005. Other events aggravated the situation. Among those, we remember that in 2011 high jet fuel prices increased the airline’s annual fuel bill by £50m and caused a £45m pre-tax loss for the same year. In order to keep the company’s operations alive, the shareholders secured a £75m rescue package. In 2013, Monarch returned to profit and announced that passengers were up 9.5%. The same day it was confirmed a plan to order 60 new aircrafts, valued at $6bn.

Unfortunately, it was just a temporary relief for the company financials, since at the beginning of 2014 it was clear that the previous issues were still putting pressure on Monarch. Finally, since the company was stuck in the same struggle as before, in October 2014, Greybull Capital acquired the company. The private investment firm, that specializes in long term investments in UK companies and turnaround situations, purchased 90% of Monarch’s stocks, just 2 hours before its license with the Civil Aviation Authority (CAA) expired. The PE fund implemented immediate changes: 700 workers were fired, an injection of £125m in capital and liquidity facilities was carried out and 8 aircrafts out of 42 were returned. Even with £27m of profit in the following year, it seemed clear that the company was unable to achieve a stable profitability. In October 2016, Greybull injected £165m to help the airline retain its flying license, but it faced a statutory loss of £291m. At the end of its considerably troubled history, on the second of October, CAA placed Monarch into administration, with projected losses of more than £100m. This operation left 110,000 customers overseas and 300,000 future bookings cancelled. It is estimated that the British government will use £60m from taxpayers in order to repatriate all passengers.

Drivers of the failure

Monarch faced significant competition on its routes and oversupply on critical destinations led to pressure on yields, load factors and margins. Monarch tried to reinvent itself as a low-cost carrier but it was impossible in a market already well supplied by dominant players like Ryanair and EasyJet. It cut about 700 jobs, reduced its fleet and cancelled long-haul flights, helping to cut £200m in annual costs under Greybull’s ownership. However, the repositioning attempt wasn’t successful and could not avoid the collapse of the company.

Moreover, terrorist attacks in Egypt, Turkey and Tunisia have affected tourism in the involved countries and resulted in less demand for flights that represented a substantial revenue source for Monarch. For instance, Sharm El Sheikh Airport, which was a key winter destination for the Group, has remained closed throughout the whole 2016.

Actions were taken to mitigate the impact of these headwinds and the company shifted the capacity away from dangerous and unprofitable regions to the Western Mediterranean, launching more fights to Lisbon and Madrid, together with other routes which included Tel Aviv and Ovda. Unfortunately, it was too late for this reaction and the selected area was crowded with several competitors. The move only caused an exponential increase in supply over demand with catastrophic effects on profitability. In fact, one of the largest markets of the airline company was the Costa del Sol region in southern Spain, which had become the playground of a very intense price war, as all the rivals organized there more flights and holidays when tourists turned away from the eastern Mediterranean. 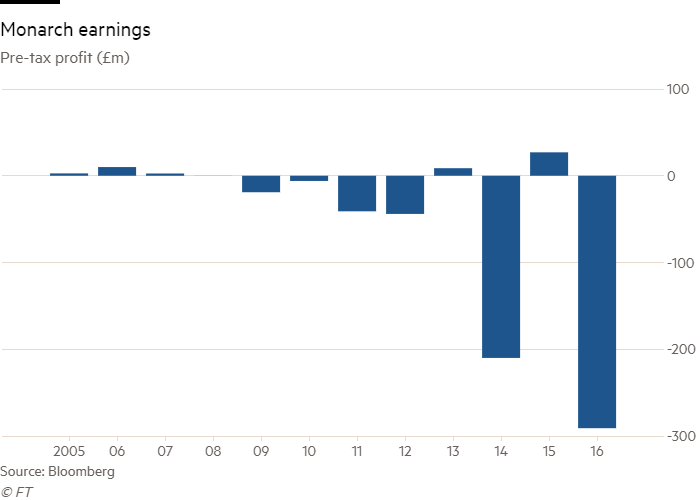 This massive increase in capacity has driven the average seat yields down, with Monarch’s revenue per seat being 13.2% lower than the prior year. The yield pressure continued, stronger than ever, through 2017, reaching double digit declines compared to the previous year. The natural consequence for the company was a huge fall in annual profit.

A strategic mistake was unquestionably responsible for the company’s breakdown, but also the consequences of the Brexit referendum played a critical role. Not only the outcome resulted in depressed bookings in the run up and immediately after the decision of Britain to leave the EU, but the Income Statement of the company continued to suffer even afterwards. Almost all of Monarch’s airline revenues were in fact in sterling, but the company had significant costs in both US dollars and Euros, together with other European currencies. Therefore, Monarch has been hit by exponentially rising costs following the sharp depreciation of the pound. In 2017, the EBITADAR decreased by £9m compared to the prior financial year due to the pressures from terrorism, the increased capacity on the routes, the lower yields and consumer confidence, and the increase in the cost base due to foreign exchange rate volatility.

The consequences of the collapse

According to analysts in the sector, at the beginning of 2017 the industry was expected to grow by 7.3%. Taking out capacity from Monarch, Air Berlin and Alitalia, as well as the recent Ryanair cancellations, the market growth lowers to 3.2%. However, for other short-haul airlines, with less competition in the short term, yields had boosted. In fact, shares in some of Monarch’s rivals rose on the news of the airline’s collapse into insolvency proceedings. The shares of British Airways’ owner IAG increased by 2.2% to 607p, while EasyJet gained 3.9% to 1,266p. Shareholders in Ryanair also benefited, with its stock trading 3.1% higher at 1,677p.

The comparison between struggling Airlines: Alitalia and Air Berlin

Both airlines from continental Europe filed for insolvency a few months ago, but kept flying their passengers to bring them back to their respective home countries. Alitalia went into administration on May 2, 2017, after employees rejected job-cuts proposal aimed at reducing costs, while Air Berlin filed for insolvency on August 15, 2017, after the withdrawal of the ongoing support of its largest shareholder, Etihad Airways. Alitalia offered the possibility for its customers to apply for reimbursement once legal proceedings move forward; on the other hand, Air Berlin decided to only refund tickets bought after the day it entered administration. As to their respective futures, after the government had ruled out nationalizing the Italian airline, it was officially put up for sale to be auctioned off. EasyJet and Lufthansa expressed interest in purchasing the airline submitting binding offers, but, since a deal hasn’t been signed yet, Cerberus Capital Management, the US private equity group, showed its interest too in the last days. Likewise, the German airline’s future is equally as unclear, as the only public information so far is that its final flight will be from Munich to Berlin on 27 October 2017.

Monarch’s winding down was very much different. Unlike its Italian and German counterparts, the British airline was not allowed to fly after it entered administration on 2 October 2017. Instead, the government has been repatriating the 110,000 passengers affected, through 27 airlines. The operation ended on October 15 and saw about 96% of Monarch’s customers brought back to the UK. The 700 flights organized over a two-week period affected 40 airports in the UK and beyond, and cost the British government more than £60m. The latter sought contributions from banks, credit and debit providers and other third parties to recoup some of the costs. Additionally, all the airline’s 750,000 future bookings have been cancelled and therefore refunded.

The goal now for the British government is for airlines to be able to wind down in an orderly manner and look after customers themselves without the government needing to step in. In order to do that, the UK transport secretary Chris Grayling has started a full investigation into the carrier’s financial difficulties, its owner Greybull Capital, and the role of US aircraft maker Boeing, in the complex refinancing it made last year.

The reforms considered today consist of both:

Last week, Grayling revealed amendments to legislation being considered by the government to avoid a repeat of such a brutal failure. While the government is doing its job, insurance brokers urge clients to double-check whether their policy covers airline failure, as it turns out not all policies provide the cover as standard.

Get the PDF of this article here

Download PDF Introduction Once seen as too unpredictable, consumer brand leveraged buyouts have grown in popularity over the past two decades. Fashion cycles and shifts in consumer preferences increase the risk of such buyouts, as Read more…

Download PDF Introduction Commercial sports, from football to ice hockey, have captivated fans across the globe and it is no surprise that this has turned the heads of investors. The industry has seen ever-growing revenues Read more…